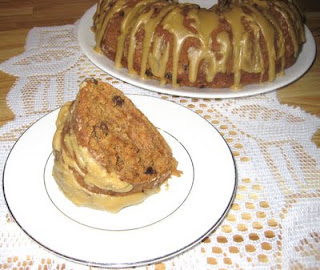 Well I got the organic raisins today and quite a few other things as well. It was super busy at Planet Organic but the up side to that was there was a lot of good sampling going on. I sampled some curry veggie pate, raspberry muffin and an organic vegan truffle! Line-ups at the till were long but shoppers were in a friendly mood and passed the time by discussing some favorite items they enjoyed from the in-store deli! Apparently the kale salad was a big hit with the shoppers behind me. I've never tried it but it was starting to sound mighty appealing! The one shopper was eating her take-out kale salad whilst the shopper behind her was all excited about her fresh bunch of kale and was explaining how she bought the salad once and now makes it twice a week at home. She said it was real easy because all the ingredients are listed on the label on the container. Between the two of them I was wondering why there was no kale in my basket!

Not like I'm not familiar with kale -- my mother grew that in our garden years before anybody had ever heard the word kale. So I had to laugh when shopper #2 said she couldn't believe that she had never hear of kale before finding it in the deli but she did mention dutch people have been eating it for years mashed with potatoes! Absolutely true -- I can vouch for that one. Other than being fortunate enough to be able to buy beautiful organic kale here in Edmonton we're so lucky that the weather has been so warm that I can still get away with wearing sandals barefoot! Beautiful crisp fall weather, nice blue skies and lots of cheery sunshine. But no vegan marshmallows!! The clerk at the till summoned the grocery manager to come and speak with me about the roadblocks standing between us and some of our favorite products.

Apparently we're having trouble ordering many products from the U.S.A. because of stricter nutritional label requirements by the Canadian Government. Just give us our marshmallows for heaven's sake -- like we care about the nutritional profile of junk foods!! In the meantime I'll try a few online stores to see if they have any stock left to sell. The manager also said that there were problems with some small companies going under in the U.S.A. and that is another reason why some products are no longer available. Plus a lot of major corporations (like Kraft) are busy buying up the small established organic "mom and pop" operations and that's putting some items on hold while they reorganize. Who knew there was so much hoopla going on behind the scenes with our favorite products!

Time to get super crafty here and learn to make our own stuff from scratch. Two of the clerks at Planet Organic were both very excited about the idea of the vegan marshmallows and said they would love to have someone in the know do a demo on making them successfully. I might just have to become Edmonton's Marshmallow Expert -- who knew there'd be a niche for that? Something for me to think about! In the meantime let's get back to the business at hand -- my raisins have been soaking in a bit of water and dark Jamaican rum for over an hour so time to forge ahead, get this cake together and in the oven. I got this recipe from Good Housekeeping Favorite Recipes Bake It Book. I have to say it's a very tantalizing cake full of spice and everything nice! Do make the glaze -- so easy and so good too -- can't go wrong with a rich caramel flavor.

1. Preheat oven to 350 F. Grease 10-cup fluted baking pan (such as a bundt) or 9-inch tube pan; dust pan with cocoa. Normally one would use flour, but in the case of a dark cake like this it is better to use cocoa to avoid a white coating. Also, take the time to invert pan and tap lightly to remove excess.
2. Sift flour, cinnamon, baking soda, salt and allspice into a small bowl; set aside.
3. In large bowl, with mixer at low speed, beat margarine with brown and granulated sugars until blended, frequently scraping bowl with spatula. Increase speed to medium-high; beat until creamy, about 3 minutes.
4. Reduce speed to low; add *150 gm soft tofu plus 2 tablespoons golden ground flaxseed* and beat well. Beat in rum and vanilla. Alternately add flour mixture and applesauce, beginning and ending with flour mixture. Stir in raisins. (I soaked raisins in 1 tablespoon of rum plus some hot water for about an hour to plump them up).
5. Spoon batter into prepared pan and spread evenly. Bake until toothpick inserted in center of cake comes out clean, 50-55 minutes.
6. Cool cake in pan on wire rack 15 minutes. Loosen cake from pan and invert directly onto wire rack to cool completely. Glaze cooled cake with Brown Sugar Rum Glaze if you like -- I liked very much!
7. Makes approximately 16 servings at about 280 calories.
*If you prefer non-alcoholic cake you can replace the rum with equal amount of apple or pineapple juice.*

1. Heat brown sugar and margarine in microwave for about 1 minute 15 seconds, stirring twice during cooking. With wire whisk, beat in rum; then whisk in icing sugar until mixture is smooth.
2. Immediately pour glaze over top of cooled cake, letting it run down sides. Let cake stand at least 20 minutes to allow glaze to set.
* If you prefer to have non-alcoholic icing you could use rum or vanilla flavoring instead of the dark Jamaican rum. Or if you used pineapple juice in the cake I think it would be nice to use 1 tablespoon pineapple juice as flavoring in the glaze as well.
- November 09, 2009 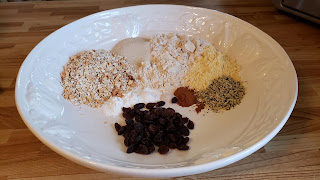